Nigerians trooped to street today, Monday 6, 2017 as earlier scheduled, to show case their bitterness over the incessant economic hardship in the Country. Though, a famous musical, popularly known as Tuface Idiabia were not physically noticed among protesters in any of the locations, but he pledges his presence in the spirit as current hunger in the country affects him too.

However, uniform security personnel stationed at Gani Fawehinmi park in Ojota, Lagos, as well as Portharcourt to prevent angry protesters to gather. The rally is considered peaceful in the street of Lagos, Edo and Abuja, amidst of Pro-Buhari in Abuja.

Popular citizens were noticed among the protesters, despite Innocent Idibia’s absence, in the likes of Seyi Law, Charley boy and others. Tuface Idibia confirmed to us, on a television conversation ,that he was not arrested or in any police custody of any kind; and that his freedom is guaranteed. 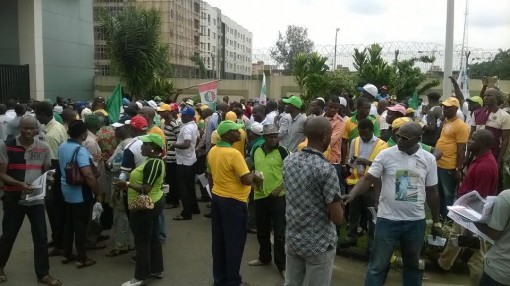 Americans Disagree over ‘Impeachment’ of the U.S President in a Public Policy Poll.

NYSC: A Female Corps member was attacked by criminals; cut off her finger

Kanye West apologizes to Kim Kardashian for public rants on their...