Few days ago, two Nigerian soldiers were sighted in Onitsha, Anambra, Nigeria; beating a crippled civilian for wearing an army outfit in the market road of Onitsha. The action of the two soldiers for brutalizing a crippled man that dressed in a camouflage outfit has been described by many concerned Nigerians as cruel, callous and an act against humanity.

The Nigerian Army has stepped into the matter; arrested the said two soldiers and invited the crippled civilian for further investigation. As well, Kokun foundation who frown at the ugly incident; described it as an era of military dictatorship amidst era of democracy. The foundation was able to identify the brutalized civilian and vowed to step into extending helping hands and support through provision of shelter and other relevant assistance for the crippled man. 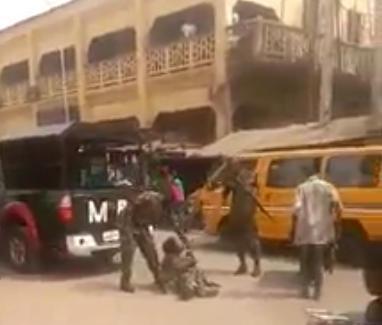 Necessary Realness: Morgan Stewart Is BACK & Answering Your Questions